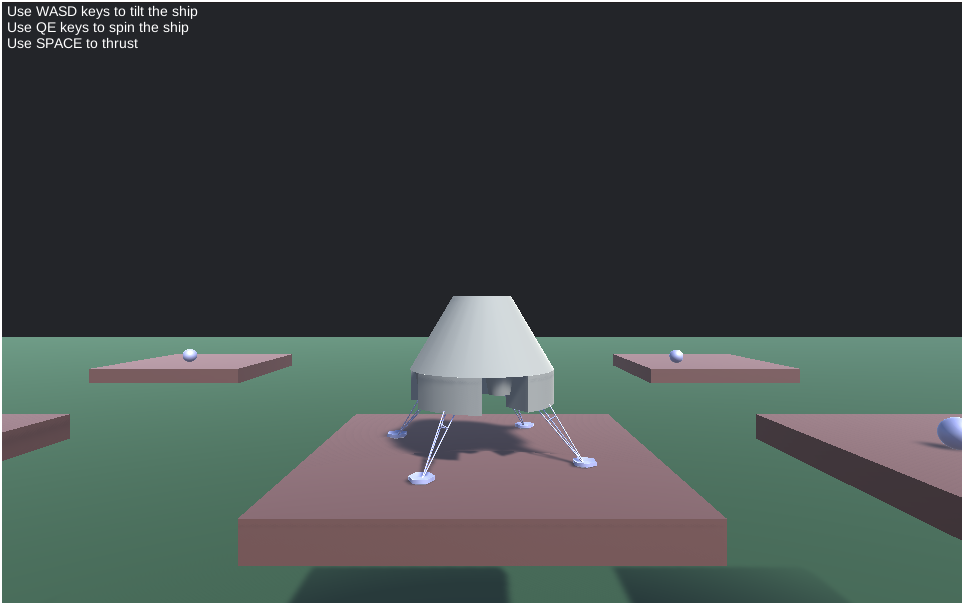 So, after reading about Unity rigidbody physics stuff and not liking anything that made me need to create a complex collider or anything, I figured that I could just build several objects and just make them inherit the location/rotation/… from the parent lander obj and make them convex collider meshes and it seemed to really work out pretty well! However, it’s way harder to roll it around if you get it lying on its side (almost impossible now).

As for the springs, I had the hardest time getting the springs to be springy. Finally, after long last, I found out that my lander’s mass was 1.0. After fiddling with the mass for the pieces of the lander, the springs started to actually be springy! I still have to work out how to make them strong and really shock-absorb-y, but I think that I’m on the right path now.

Also, I figure that I’d play a little with sound, so instead of googling thruster sound and copying it into my game, I figured that I can probably just make my own sounds using Reason (I guess I could make a soundtrack too one of these days), so I fired up a simple synth, got it to output white noise, toned down the noise a little bit so it sounded a little deeper and saved it and loop it whenever the player hits the thrust button. It didn’t take very long and … tada! Royalty-free sound!